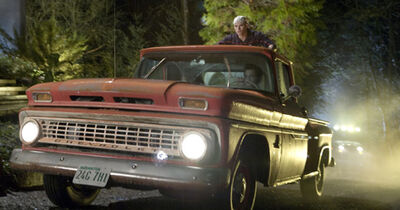 Charlie Swan bought Billy Black's truck for his daughter Bella when she decided to move to Forks to live with him. It was a gift to show his appreciation for her moving in in Twilight.

Bella was hesitant about the truck at first when Charlie told her about it, worried that it would cost too much money to keep up and that it might be in bad condition, but as soon as she saw it, she knew it was perfect for her.

Bella thought about ramming Edward Cullen's Volvo with her truck when he blocked her path to Tyler Crowley ask her to the spring dance.

Both Edward and Charlie were worried about the truck making the trip up to Seattle from Forks, though Bella only worried about how much gas it would take.

The truck "died" before the beginning of Breaking Dawn, and it was replaced when Edward lent Bella a Mercedes Guardian, and later presents her with a red Ferrari.

It's described as a 50s-60s faded red/orange truck, bought by Billy Black in the 80s and frequently repaired by both himself and Jacob. Billy didn't want to sell it, but lost his need for it when he became disabled. On Stephenie Meyer's website, it is said that her truck is a 1953 Chevy Pick-up truck.

In Life and Death, Charlie bought the truck from Bonnie Black for his son Beau Swan. Like Bella, Beau liked it upon first sight.

While Beau was turning into a vampire, the Cullens decided to fake his death and spare his parents' the danger and heartache. They put a dead body inside the truck, then "veered it down a ravine somewhere in Nevada". The truck burst into flames, along with the body inside.

Retrieved from "https://twilightsaga.fandom.com/wiki/Bella_Swan%27s_truck?oldid=696703"
Community content is available under CC-BY-SA unless otherwise noted.