The Cullen crest is a family crest that is worn by all of the Cullen family in the Twilight films. In the books, there is no mention of the Cullens wearing the Cullen crest. Each member wears the crest to show that they're a family, not just a coven, and it also shows their loyalty to each other. They are always seen wearing their form of the crest. The only exception to that is Rosalie's crest isn't seen during fighting and most running scenes, due to its bulkiness and when running on the green screen it hits her.

In Breaking Dawn - Part 1 and 2, Alice's and Rosalie's necklaces are changed to smaller sizes and the rest of the Cullens are hardly seen wearing any of their emblems. Renesmee is the only family member to lack one.

Each part of the crest represents something different: the lion represents strength and ferocity, which is a characteristic of the vampires. The hand is faith and sincerity, showing that the Cullens are loyal to each other. The trefoil at the bottom represents perpetuality, which is lasting forever, showing the vampires' inability to die naturally. Catherine Hardwicke discusses this in her book accompanying the Twilight saga film's, The Director's Notebook: The Story of How We Made the Movie.

Emmett, Jasper, and Edward each wear a leather cuff bracelet on their right hand. Rosalie wears a large pendant necklace, which changes to a small one with bright colors in Eclipse, and changes again to an even smaller pendant in Breaking Dawn. Alice wears a choker-like necklace, and in New Moon and Eclipse is seen wearing a turquoise cabochon bracelet that also had the crest on it; in Breaking Dawn, she is seen wearing a long necklace with the crest on. Carlisle wears a silver ring on his left hand. Esme was originally supposed to wear a green and gold bracelet, but it was later changed to silver. In New Moon, Bella wears a red and green ring in the scene where she is a vampire (as seen in Alice's vision of the future). But in Breaking Dawn - Part 2, she wears a leather cuff bracelet like Edward, Emmet, and Jasper's but a bit smaller to match her femininity. Renesmee's locket has the Cullen crest on it. 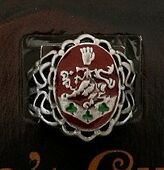 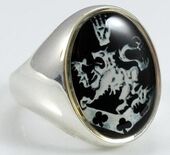 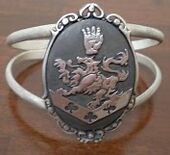 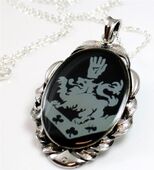 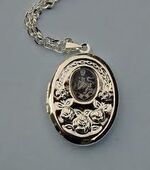 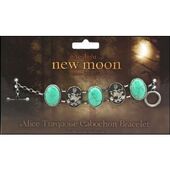