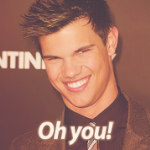 Hello, And Welecom To My Page (Also I have bad Grammar)Edit

Wow, thanks for coming! I bet your not going to find that much, but thanks for trying. 8)

You can call me BlaBlaBlaBlaBlaBlaBla, Eminem, KitKat, K.C, Kitty or Kit. I'm going to say that Im REALLY nice, but sometimes its the other way 'round. Im really like a dork and geek; I like to read books.

I love the Twilight Saga; I mean... show me a person who doesn't like Twilight, and I'll show you a mad person. My favourite Twilight movie would have to be Eclipse as thats the movie where the romance between Bella and Jacob finally came out ('Bout time, gurl). I watch the Twilight Saga every weekend and sometimes in the midweek; Im not gonna lie to you, but sometimes I feel that I might get bored of watching and never you mind reading Twilight. Im not fond of Bella, Is anyone going to take a guess why? She's just so annoying. Anyone is better than Bella. And I mean anyone. But back onto me being geeky and dorky; Im DORKALIOUS! But BD -2- is sure going to be fun; need a hint? Theres a little cool coven called the Denali Coven, btw. Their totally fabalous. Reading the Breaking Dawn book was such a effort, I mean.. did you see the size of it? Anyway, I knew I had to read it 'cos I wouldn't be able to wait 'till November to finally see what its about. Haha. The Denalis are probabley my favourite coven EVER ( No offense to the Cullens). But you get the story already; Callie loves Twilight forever! Don't try to break us apart, or else I'll vandalise your userpage..... I'm kidding. Oh yeah, The Hunger Games is cool too, so don't mess with it, K? Kristen is cool, Robert is avarage, Taylor is hot, Ashley is a great role model, Jennifer is my Jennerderp and Josh is my boy with the bread, any questions? You'll also find me on other wikis (Which you will find at my info at the top, fyi), but this is the wiki I mostly log on-to. I hate the way people come up to me and say 'Im a Twihard'... Im like 'Yes, '.. Im mean... some people wouldn't know what a Twihard is if it came up to them wearing a name tag and introduced theirself. And omg, did you see the film Ted? It's amust see.

OK. I'm done now. But if you feel like reading the rest of my userpage, by all meaning go ahead!

If you like you can leave a message on my talk page.

My Fave Pages On This Wiki!Edit

&nbsp Yeah, the Hunger Game's is really good. But In all fairness, Twilight was here first. But I love both of them!

Cast and Crew of The Hunger Games.EditEdit

This is my opinion of them.

I like Carlisle. I also think he's a cool doctor, lol. He loves his family, which is nice. Yeah, he's cool.

Esme is the sweetest. She loves to be nice, but thats about it. I do like her, though.

Jasper is fine, I guess. He wouldn't be my favourite, though (Sorry 'bout that Nerm). I mean, he obviously loves Alice, but he doesn't do a whole lotta much.

FINALLY, a Cullen that I actually love. I love Alice. She's sweet and annoying, but thats OK. Talk smart, girl.

Im actually scared still of him. But he's funny, so I guess he's fine.

I do like Rose. I don't love her, but I like her. She has a good sense in style, and likes to be smart. Yeah, she's alright.

I don't really like Edward. He's alright, I guess.

Another section of my opinion.

I don't like Irina. Mainly because she hates the Wolf pack.

I really like Carmen. She's one of my favourite's in the whole Twilight Saga.

I like him the same as Carmen. Nice boy!

My opinion the the Volturi. Like my opinion or not, I don't care.

I don't really like him. But to keep this going a little longer im going to say that I like his cloak. Happy?

I never really thought much about Marcus, but I guess he's alright. I feel bad for him for reasons I don't know!

I think she's a bitch. But hey, theres nothing wrong with being a bitch, right? I like her power, though.

I also like his power. Cool vampire, though. Keep cool, bro.

God, I love his hair in Breaking Dawn. He's actually my favourite person from the Volturi. He's not bad looking either, lol.

Yeah, he's cool. I wonder who would win in a fight between him and Emmett. Probably Felix...

My opinion on those humans. I don't have a opinion on all of them, though.

He knows how to shoot a gun.. He could come in handy when your getting robbed!! I like Charlie, though.

He's down with the kids! Billy's cool. Yeah, I like him, lol.

Mike is the same as Jessica.

Her singing is fab. Love her.

You need to look and join some of these Twilight websites!

I would like the movies more then the books because you can actually watch the film happen. But as for the books, its good because it tells you some of the deleted scences and stuff.[15]Added by Charmed-Jay But I like them both, I guess. Theres no problem with the books as I love reading, but the movies are better.

Songs that could NEVER and EVER get old...Edit

Ooh, Can he resist?

Good for you, hon.

Couples who should exist, but don't. Edit

Bella Swan moves from Phoenix to Forks to live with her father Charlie Swan to allow her mother to travel with her new husband, Phil. After moveing to Forks, Bella finds herself drawn to a myserious, handsome boy, Edward Cullen. She eventually finds out that he is a member of a Vampire family who drinks animal blood instead of human blood. Edward and Bella fall in love, while James, a sadistic vampire from another coven, is drawn to hunt Bella. Edward and his family do well to try and defend her. She escapes to Phoenix, where she is tricked into comfronting James, who tries to kill her. She is seriously wounded, but Edward resuces her and they return to Forks, having killed James.

Edward and his family leave Forks because he believes he is endanering Bella's life. Bella goes into depression until she develops a strong friendship with Jacob Black, whom she descovers can turn into a wolf. Jacob and his other wolves in his tribe much protect Bella from Victoria, a vampire seeking to avenge the death of her mate James. Due to a missunderstanding, Edward believes Bella is dead. Edward decides to commit suicide inVolterra, but is stopped by Bella, who is accompanied by Edwards sister, Alice. They meet with the Volturi, a powerful vampire coven, and they are relesed but only if Bella is turned into a vampire in the near future. Bella and Edward are reunited, and they all go back to Forks.

Victoria has created a army of Newborn vampires to battle the Cullen family and kill Bella. Meanwhile, Bella is compelled to choose between her relationship with Edward, and her friendship with Jacob. Edward's vampire family and Jacob's tribe come together to kill Victoria, with a sucessful end. In the end, Bella choosed Edward over Jacob, and she agrees to marry Edward.

Bella and Edward are married, but their honeyoon is cut short when Bella discovers she's pregnant. Her pregnantcy progresses rapilty, weakning Bella. She nearly dies giveing birth to her and Edward's half human & half vampire daughter, Renesmee. Edward saves Bella's life by turning her into a vampire. A vampire from another coven see's Renesmee and mistakes her for a "Immortal child". She informs the Volturi, as the existence of such beings is against the vampire laws. After a intence confrontation, the Cullens and their witnesses convince the Volturi Renesmee is no danger, and they are left alone. [40]

Add a photo to this gallery

Oooh, would you eat this?Edit

][http://twilightsaga.wikia.com/wiki/File:Breaking_Dawn_Part_2_movie_notes.gif ]Add a photo to this gallery==My Awesome Friends On This Wiki! :) Edit==

Great Gifs Act || (You may have to click on them).Edit

My opinion on Bella and JacobEdit

[81]Added by JuliaPierceThis is what you call a good couple! Why couldn't Meyer make Jella fall in love instead of Bedward?!? I mean, Jacob actually loves Bella, unlike Edward who loves Bella only for her scent. Bella is even happier around Jake then she is Edward, thats a happy marrage, isn't it? Edward, please get lost.

[82]Added by TeamTaycobSoDealWithItGod, I love this show. You get very curious trying to figure out whos the mystery "A", but its a must see. If you like things about mysterys then you'll really LOVE this show, lol.

[83]Added by TeamTaycobSoDealWithItShe's not really one of my favourite if im honest. But she is really nice and cute. She loves everything to be done. Yeah, she is cool, though.

[84]Added by TeamTaycobSoDealWithItGod, I love Aria. She's just so cool. I don't get how some people don't like her. She's the best.

[85]Added by TeamTaycobSoDealWithItI love her style, alot. She's not the strongest, but she is growing lot. I would go shopping with her. I just love her.

[86]Added by TeamTaycobSoDealWithItI love her hair!! It's just beautyful, lol. No, she is nice, though. Yeah, I do like her indeed. God, I can't get over her hair. She's flawless.

I nearly cried when I saw she died! I didn't particually like her, but she was alright. I just though she needed to learn to be more friendly, thats all. Nice though....

Wow, you actually made it through my userpage? You're amazing! Thanks for reading, I hope you enjoyed it as much as I've enjoyed making it. Bye, bye!! Categories:

Retrieved from "https://twilightsaga.fandom.com/wiki/User:BlaBlaBlaBlaBlaBlaBla?oldid=524713"
Community content is available under CC-BY-SA unless otherwise noted.