Wuthering Heights is a novel by Emily Brontë that was published in 1847. It is one of Bella Swan's favorite books. Her copy is said to be worn out because she has read it many times, and lays flat to mark her page. There are a few excerpts from the book in Eclipse. The 2018 Prop Store auction revealed that Bella owned in New Moon, the Barnes and Noble Classic's edition of the book.[1]

The Twilight saga consistently mentions Wuthering Heights. During Eclipse after kissing Jacob, Bella mentions how she is just like Cathy, who is mean and selfish, only she has better options. Edward says that he sympathizes with Heathcliff in more ways than he thought he could after rereading the novel. Characters in the series who have similarities to those in Wuthering Heights, including Bella (Cathy), Edward (Heathcliff), and Jacob (Edgar).

Edward can't figure out why Bella loves the book so much.

Since the Twilight phenomenon began, Wuthering Heights has been repackaged with a Twilight-themed cover. 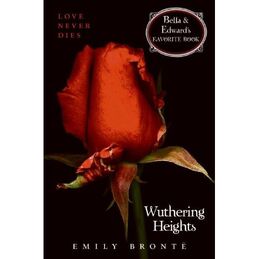 Wuthering Heights
Add a photo to this gallery

Retrieved from "https://twilightsaga.fandom.com/wiki/Wuthering_Heights?oldid=689581"
Community content is available under CC-BY-SA unless otherwise noted.